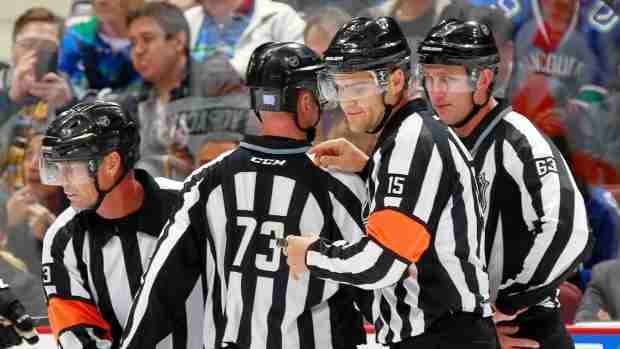 Since when is pulling a player’s helmet off not a penalty?

Since when is a blatant, could-have-been-avoided-but-didn’t-even-try shoulder hit to the head only a two-minute minor penalty?

From missed calls to nonexistent calls, the NHL referees have been obnoxiously inconsistent this year, and it is incredibly aggravating.  Even calls as basic as icing haven’t made sense.  Someone asked me to explain icing at a recent Islanders game, and I really couldn’t – neither could anyone around us – because none of the icing calls that night had anything in common.  Sometimes, the players were practically on top of the puck as it crossed the face-off dots, but it was whistled down.  Other times, absolutely no one was near the puck, but it wasn’t whistled down.  Sometimes it was launched from behind the blue line, sometimes from in front of the red line.  The linesmen seemed as confused as the fans.

I was also asked to explain delay-of-game recently, but I found myself at a loss, once again because the refs’ calls have been so contradictory.  Let alone delay-of-game penalties, simple delay-of-game whistles that create a new faceoff.  Sometimes the refs allow a scrum in the corner to go on for a full minute.  Other times they stop it after ten seconds.  In one Islanders game this year, Anders Lee was given a delay-of-game penalty because a player for the other team had him pinned in an impossible position for a several seconds on top of the puck.  Yet, Lee didn’t move the puck fast enough, so he was penalized.

More serious calls that have been dismissed, ignored, or not noticed range from slashing to elbowing but especially include crosschecks.  In the most recent Islanders vs. Bruins game, the Bruins got away with multiple crosschecks in a row, but the Islanders got the retaliatory penalty.  In the situation, Matt Grzelcyk crosschecked Lee at least three times and slashed at Lee meanwhile Charlie McAvoy slashed at Anthony Beauvillier.  That’s three individual penalties which should have created a 5-on-3 situation; instead, Grezlcyk got two consecutive two-minute penalties, and McAvoy’s was ignored.  The Islanders did not convert the four-minute power play into a goal.  Would they have scored on a 5-on-3 instead?  Probably not, as the Islanders have one of the worst power plays in the League.  The point here, once again, is the blatant but missed penalties.

Some of these missed calls directly affect the outcome of games, besides unfair or missed power play opportunities.  When the Islanders journeyed to Edmonton on Thursday, they lost in overtime – even though Coach Trotz pointed out that the winning goal was scored while the Oilers had too many men on the ice.  The goal should have been recalled due to the minor bench penalty – but the referees did not even acknowledge Trotz, and the Oilers left the ice with the win and no worries.

The most concerning part of the refs’ lack of calls, though, is the way it jeopardizes players’ safety.  The calls that are being ignored are not just simple slashing or holding calls.  They’re not just basic tripping penalties.  They’re slew foot penalties.  For example, when Nikita Kucherov very blatantly slew foot Scott Mayfield during the February 1 game at Nassau Coliseum.  A slew foot move is a planned action, not an accident; it inherently involves intent to injure, and therefore, should be a major penalty – yet, the refs only called a two-minute minor that night.  In the following days, Kucherov was fined for the slew foot by the NHL, proving the refs ignored a serious call if Toronto had to get involved to correct their mistake.

Also during that game in Edmonton, Connor McDavid leveled Nick Leddy with a direct shoulder hit to the head and follow-through from his elbow.  Despite the supposedly more stringent rules about head contact this season, McDavid only received a two-minute penalty.  When Edmonton played in Brooklyn, Mikko Koskinen slashed two Islanders players with no reason to.  Yes, they skated close to his crease, but they were on the forecheck both times – players of any team always breeze near or through the crease, when chasing the puck on the forecheck.  The puck was behind Koskinen, and he had no intent or method to play it.  The calls should have been obvious as either slashing or interference.  Koskinen also punched Matt Barzal as he was skating to beat an icing call.  Again, Barzal skated near, but not in, the blue paint and had no intention of approaching the goalie, as he first had to collect the puck.  Koskinen should have been called for roughing or interference, but it was ignored.  None of the three should-be calls were even reviewed.

In Calgary on Wednesday, a Flames player ripped Cal Clutterbuck’s helmet off, but the whistle was never blown.  Another Flames player, who was on the bench, punched at Clutterbuck, who was on the ice.  Nothing was called of that either.  Of course, this was not the first time that players’ illegal actions on the bench went ignored by the referees.  When the Avalanche played the Red Wings in December, five players on the Detroit bench attacked Matt Calvert when he was hit into the boards near them.  Calvert had tried to shake off the hit and skate to rejoin play, but Dylan Larkin held onto Calvert’s stick pulled on it so that Calvert fell into the bench.  Tyler Bertuzzi proceeded to punch Calvert as he was disoriented and held there.  The referees broke up the fight but did not make any of the obvious and highly necessary calls.  Again, it was left to Toronto to decide penalties after the game, and they only suspended Bertuzzi.  The other four players at fault got away with it.

Similar to the slew foot incident, these Red Wings also clearly had intent to injure.  But what is the point of the NHL’s intent-to-injure rule if it is rarely enacted and largely ignored?  When so many hits send players into the dressing rooms for concussion tests, shouldn’t the refs be paying a little closer attention to the penalties?  The referees consider intent-to-injure if a player is spurting blood after a penalty.  Even then, it’s rarely called because intent-to-injure is so subjective per referee.  I believe that they should also consider intent-to-injure if a player needs to undergo a concussion test.  After all, if a player is hit hard enough that he can’t get up or needs to be examined for signs of brain damage, the hit was probably harder than it had to be – no subjective viewpoints necessary.  Yet so often, major and minor penalties alike are ignored.  Day in, day out.  Game after game.

Several of the recent Islanders games have been described with a “playoff atmosphere” even though there’s still twenty or so games to play before the playoffs arrive.  Games like those are fantastic when the crowd is louder than ever and really into the game or when the players are performing at a higher caliber than usual.  Those games are not fantastic, however, when they become unnecessarily rough and a free-for-all, no-rules, anything-goes contest.

Instead of allowing all the players to become seriously injured before April, why don’t the refs actually start doing their jobs and calling clean games?

The Blame Game: Who Sports Fans Fault Most for Bad Seasons

Succeed or fail; some sports fans promise to be fans for life. But no matter how much peop…