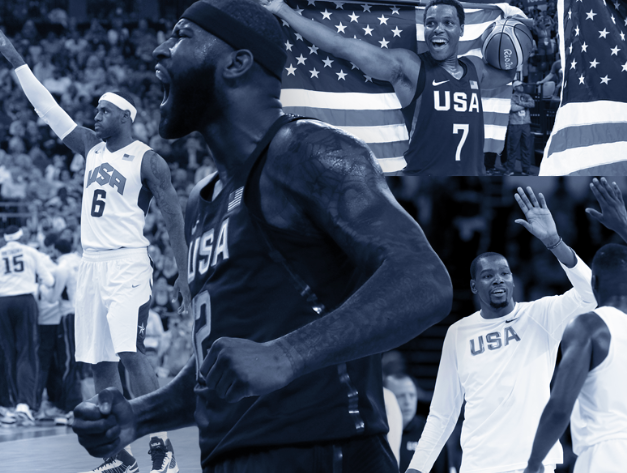 With the looming presence of USA Basketball steadily approaching, the United States has essentially assembled a Monstar level roster…just for training camp. Now, I get it, competition incites more competition, iron sharpens iron, but the 20 man roster that will compete in Las Vegas from August 5th-9th before being chiseled down to 12 seems impossible to pluck at. Mind you this is for the 2019 FIBA World Cup, that has found a home in China this time around, but one could argue this is a team solid enough to compete in next year’s Olympics.

The roster includes Houston’s starters James Harden, Eric Gordon and P.J. Tucker, Portland’s dynamic duo Damian Lillard and C.J. McCollum and finally Milwaukee vets Brooke Lopez and Khris Middleton. Another notable pair of teammates that made the roster are two guys who have been tasked with helping Lebron truly bring back the phrase “Showtime” in LA, Anthony Davis and Kyle Kuzma. Luckily, Kuzma isn’t the only rising junior on the team, he’ll be accompanied by two other standouts from his draft class in Jayson Tatum and Donovan Mitchell. The rest of the West is rounded out by Paul Millsap and Harrison Barnes while the East is represented by Kevin Love, Kemba Walker, Bradley Beal, Tobias Harris, Andre Drummond, Myles Turner, and reigning NBA Champ, Mr.North Philly himself, Kyle Lowry. Bottom line, whoever is making these cuts has their hands full, but whoever has to step on the court with that final team… *Liam Neeson voice* good luck.

So…what’s this got to do with Philly?

Everything, Philly’s an American city, right? But in all seriousness, the most underrated storyline of this team lies in a coach and player relationship. No, not Gregg Popovich and the ghost of Kawhi’s laugh, i’m talking about the Nova’ ambassadors in assistant coach Jay Wright and Kyle Lowry. Yes, I know it sounded weird saying assistant coach before Jay Wright but the 2x National Championship coach is indeed ⅓ of the staff, with Steve Kerr and Nate McMillian taking the other two spots. Kyle is fresh off his first NBA Championship and is already an Olympic gold medalist.

Meanwhile, Coach Wright just hauled in another hat trick by winning a Big East regular season title, Big East Tournament Title and Big East Coach of the Year award, with a team that sent four guys to the draft just a year ago. Back in 2006, the two tied for a regular season title at Villanova but due two tiebreaker rules, the ultimate Champion was UConn.

Coach Wright is a lock, Kyle will more than likely make the team, so maybe…what’s really happening here is one of the best redemption stories in basketball folklore and more importantly, one of the most storied player-coach relationships in sports history. Stay Tuned.