Saturday, January 28th, 2023
THE LATEST
Home Premier League What does the signing of Calum Chambers tells about Aston Villa?

Former Arsenal right back Calum Chambers has signed for Aston Villa. The former England right back signed a three-and-a-half with the West Midlands side. Chambers is the fourth signing of the transfer window for newly appointed manager Steven Gerrard.

Chambers has suffered a lot of injuries through his career, most lately rupturing his ACL in 2019. Once seen as a great future prospect, Chambers only played 74 total Premier League games in seven seasons.

Personally, I don’t see Chambers being much of an improvement over Matty Cash. Chambers has had trouble staying on the field for his whole career, suffered a huge knee injury just two years ago. Looking at their stats from fbref.com, Chambers has the edge on offense whilst Cash is a better defender. We do also have to remember, that Chambers’ stats are from a much smaller sample. And to say that Chambers is a critical step towards top 6 is in my opinion laughable. This is a player that played for Arsenal twice this season. These games? First game of the season against newly promoted Brentford, when they lost 2-0, and their 5-0 loss against Manchester City. Chambers is not a top 6 quality player in my opinion.

What Steven Gerrard is getting in Chambers is potential. Despite just turning 27, Chambers is capable to play at centreback if needed, and was an English international as a 19-year-old. If he can keep himself fit and get himself into good form, he might become a great signing for Aston Villa. 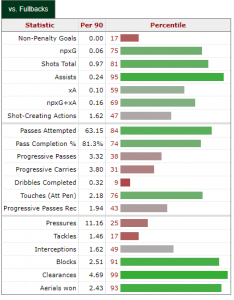 Hope In The Theatre Of Dreams

Despite a devastating loss in London, there is a new era on the horizon in Manchester. Eri…