Welcome to week 14 of the 2022-2023 NFL Season. If this is the first time reading one of my articles, welcome to my weekly picks blog! I will give you guys’ predictions for every game in the NFL each week. First, First, First, I will provide predictions in three ways: Straight up (Picking the game’s winner), ATS (Against the Spread), and Over/Under of the total. Then, I will give my three best bets every week in more in-depth, and those will only be ATS; one of them will be my Greene Guarantee of the week. Last Year I had a pretty successful season, so without further ado, let’s get into it! 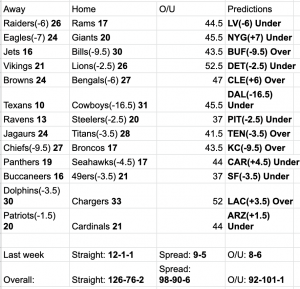 It’s been two weeks since my last best bets blog, as there was a slight hiatus due to a deadly sickness I acquired and Thanksgiving spent with family. Of course, in those two weeks, I went 5-1, with Greene’s Guarantee going 1-1. The winning streak for the Guarantees ended at five as the Browns scored THREE defensive touchdowns on the Texans, who only gave up 6 points but somehow lost 27-14. That is what it took to take down my winning streak. Nonetheless, even though 90% of my audience didn’t see my picks, I am counting them! So let’s keep this hot streak going, as best bets are back for week 14 of the NFL Season.

There are a couple of reasons I like the Panthers in this spot. The first is that Sam Darnold is at QB. People forget he was the QB when the Panthers got off to that hot start last season, and it seems like he has given them a spark once again. Second, the Seahawks are coming off an emotional divisional win vs. the Rams; it also came with a price, as the Seahawks will be without starting running back Kenneth Walker III. I believe he is the offense’s catalyst; without him, the running game will struggle, and hence the offense will also.

The Panthers are 5-1 ATS in the last six overall, and Carolina is 2-7 ATS in the last nine road games. Meanwhile, the Seahawks are 7-15 ATS in the last 22 after a straight-up win. The over is 4-1 in Seattle’s last five after an ATS loss. We are getting into the point of the season where playoffs teams make runs and frauds lose games their not supposed to. The Panthers, off the bye, can win this game outright, killing the Seahawk’s chances at the playoffs.

In Mike Tomlin’s tenure as Head Coach of the Pittsburgh Steelers, he has never had a losing record. That record so far has been in jeopardy, yet the Steelers have shown signs of life as they have won three out of their last four and, in those wins, have led up just 14.33 points/gm. They have a great chance to show off their defense again vs. a hurt Ravens offense. With Lamar Jackson being out, even though the Ravens won, they could only muster 7 points, which was on the game’s last drive. The Steeler’s offense is slowly coming to life as they scored 20+ points in the previous four games except for one where they scored 19. The

Steelers are 2-3 ATS at home this season, while they are 5-2 ATS over the last seven contests. The Ravens are a career 2-5 without Lamar Jackson and have lost the four in this type of scenario. With such a low line and the hotter team, I think the Steelers will win a huge division game at home.

They are not many games in the NFL that I like to consider “must-win,” but this is a must-win game for the Los Angeles Chargers. If they lose this game, they fall to 6-7 and would lose to the Dolphins, who currently own the 6th seed in the playoffs in the AFC. A loss would likely mean the best the Chargers can do is to be the 7th seed in the AFC. This team has way too much talent for that. Not only that, but jobs will be on the line. Brandon Stanley will officially be on the hot seat with a loss, and questions will start to come up, with Justin Herbert questioning if he can be a winning QB in the NFL. This game isn’t about trends or any stats. This is because the Los Angeles Chargers are too talented to miss the playoffs once again and not have a winning record in the NFL. It also helps that Jaylen Waddle’s status is up in the air as he came up hobbled in their loss vs. San Francisco. This is a must-win, and I think the Chargers get the job done on Sunday Night Football. I guarantee it!