Welcome to week 17 of the 2022-2023 NFL Season. If this is the first time reading one of my articles, welcome to my weekly picks blog! I will give you guys’ predictions for every game in the NFL each week. First, First, First, I will provide predictions in three ways: Straight up (Picking the game’s winner), ATS (Against the Spread), and Over/Under of the total. Then, I will give my three best bets every week in more in-depth, and those will only be ATS; one of them will be my Greene Guarantee of the week. Last Year I had a pretty successful season, so without further ado, let’s get into it! 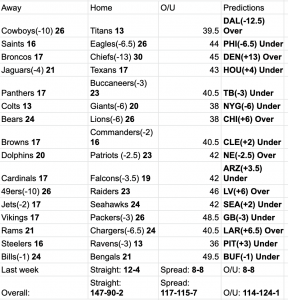 Last week was one of those weeks that made me want to quit gambling. While Greene’s Guarantee hits easily once again with the Panthers smoking the Detroit Lions, the other two games were full of bogus fluke stuff. The Falcons- Ravens game went exactly how I thought it would go. Both teams ran the ball a ton and struggled to score the ball. The Ravens scored one TD in the game and decided to go for 2 when they were up 12-0. It made zero sense, but of course, they got it. The Falcons went for it twice on 4th down when they could’ve settled for easy FGs, and they lost by 8 when I had 7.5. The Patriots-Bengals game was wild. The Patriots were down 22-0, and I was texting my friends about how I couldn’t win a bet vs. Joe Burrow! Then luck went my way, a pick-six, two extra missed points, and an FG miss late, and the Patriots scored a 40-yard TD on 3rd and 26 to make the score 22-18. I had +3.5, and all they had to do was kick the extra point and make; they missed! But wait! Ja’marr Chase fumbles, and the Patriots get the ball back; they are at the Bengals’ ten and might win the game outright. Then Rhamondre Stevenson fumbles the ball, and all hope is lost; the Patriots lose by four and lost another best by 1 point. With tough losses and two weeks in the regular season left, I am under .500 on my best bets; that’s unacceptable! It’s time to bounce back, so without further ado, let’s get into my best bets for week 17.

This is one of those games where you have to ask yourself which team resembles a playoff team. To me, that is the Seattle Seahawks. Mike White returns as QB for the Jets, and while that means better offensive performance from the Jets, it hasn’t resulted in wins as he is 1-2 as a starter. Seattle had a much tougher schedule as they faced the 49ers and Chiefs in back-to-back games, making this line slightly inflated.

The Seahawks have the advantage at QB and Head coach in a must-win game, giving me the team with the edge in both those categories and at home. Seattle picks up a must-win game at home.

This is the most disgusting play I have had all season, but this line makes no sense. The 49ers are the hottest team in the NFL, they have won eight straight, and not a single one has been close except for the home win vs. the Chargers. Then, new breaks today that Derek Carr is getting benched for the rest of the season, and Jarrett Stidham will get the start. This is one of those games that don’t make sense in the NFL; the 49ers have the best defense in the NFL, yet somehow Jarrett Stidham will give them a run for the money, and I believe this because they have the weapons to do so and they are finally healthy in Darren Waller and Hunter Renfrow.

I truly believe the 49ers are on upset alert here; for the first time this season, the Raiders have zero pressure on them, and Brock Purdy is due for a bad game; Mr. Irrelevant can’t keep getting away with this. The Raiders give the 49ers a run for their money and cover.

This is the squarest play I have as my Greene’s Guarantee this season. The public knows the Packers need to win out to make the playoffs, and naturally, the initial line that favors the Packers. I don’t care if this is a trap; the Packers need this game, and all the Vikings do play in close games. Kirk Cousin in the cold, with the two seed on the line, is the exact time to fade the Vikings. Not to mention the Vikings, by far, have the lowest +/- on any team that has won 10 games in NFL history. They are frauds I don’t care about the trends in this game. The Packers win and continue their playoff hopes; I guarantee it!