Does the Tottenham curse actually exist? What else can explain how such a talented side can only ever be the bridesmaid? Maybe it’s a combination of a hit or miss transfer strategy and a coaching cycle that’s coming to its end.

Tottenham have been so weird this season. A high octane attack with fun players that have to make up for a defense starting Emerson Royal in 2023.

While most of their rivals have found success in a coherent transfer strategy, besides Chelsea, Tottenham have fallen behind. Besides Richarlison and a few others, Tottenham have made some big whiffs.

Antonio Conte has been one of the Prem’s great enigmas since his arrival in the Prem. Clubs are guaranteed to see quick improvement. However, Conte’s cycle always ends with him alienating the club and leaving his reputation questioned.

It may be time for Tottenham to consider some drastic changes in management. Conte’s time seems up, but they need to get their next manager right or waste more of their elite talents.

To completely deride the Spurs’ transfer policy would be wrong, as they have found some true gems. However, their inability to properly develop those younger assets are worrying.

Emerson Royal is a great example of this conundrum. Emerson was an exciting left back with Betis and seemed to be heir apparent to Jordi Alba. So it seemed like a massive win when Tottenham signed him and Sergio Regulión.

The club seemed to have their left back situation solved for the next decade. However, like the best laid plans of mice and men, things went awry.

Regulión struggled to be creative in the Prem and was loaned out to Atletico in 2022. Emerson’s no look pass is the only thing that can truly encapsulate his time at the club. To be frank, Emerson is one of the Prem’s least effective left backs.

Tottenham, needing to fix these issues, signed Destiny Udogie, a promising Italian left back, to seemingly replace Emerson. With Regulión loaned out, it was Udogie’s chance at the left back spot. Instead the club loaned him out as well and are now stuck with Emerson. 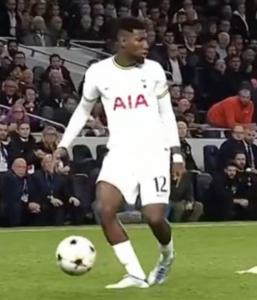 Again moves like Kulusevski, Richarlison and Romero are all incredible and have helped the club. However, it’s been the marginal moves that have killed the Spurs. Not being able to hit on certain positions has forced the club to constantly replace players.

Since the club’s return to relevance, Tottenham has had a strange relation with transfers. With hits always being closely followed by a staggering miss.

Conte is a mystery. A coach who is always wanted by Europe’s top clubs, but has only won two trophies outside Italy.

It’s difficult to truly make out what Conte’s legacy is. On one hand, he can take just about any club that is struggling and build them into an exciting side. On the other, Conte’s brash style always ends in disappointment and a departure.

Taking over Tottenham in the post-Potch era was always going to be a tough task, but Conte found a way. Adapting his favored 3-5-2 to the modern Prem unlocked another level of Son and the rest of the attackers. While the defense struggled, the attackers always found a way to bail them out.

When it works, Conte’s style is a modern adaptation of an old Italian classic. And for the first year and a half, it worked.

However, as the curtain begins to draw on this season, Tottenham is all but out of the Champions League spots. Despite being characterized as a defensive guru, the team is leaking goals with no clear answer defensively. Reinforcements aren’t coming to bail them out, so this may be the club’s achilles heel.

At the same time, he is seemingly becoming more irritated at the lack of control he has at the club. This has been another theme of Conte’s managerial career where he has failed to grab the project and fully lead it.

When his time as a manager is over, Conte’s legacy will be fascinating to discuss. A great club builder who has failed to push a club to the ultimate level.

Destined to always be the bridesmaid, Tottenham has achieved a lot for a club that is outside the more prestigious top 5. Unfortunately for Tottenham fans, it’s becoming increasingly unlikely that they’ll ever see the club’s greatest generation win a trophy. If Tottenham wants more out of this Harry Kane generation, they have to  rethink their situation.